Today I welcome Ki Brightly to the blog to answer a few questions for Interview³.

5) What are your 3 essential writing tools?
Glitter pens, notebooks, laptop.

6) Where are your 3 favourite places to write?
Barnes and Noble, Starbucks, my good friend’s kitchen table. (She lets me hide at her house to work when she’s out of town.)

7) Name 3 items on your writing wish list
I would like to write a good murder mystery. I’d like to publish with one of the big 5 someday. Also, if it isn’t too much to ask, I’d like to curb my impulse to buy writing books. (Probably won’t ever happen.) I never read more than one chapter out of any of them before I realize I’ve read whatever advice it is about a thousand times before.

8) What are your top 3 tips for aspiring writers?
Sit your butt in the chair and write. Don’t wait for inspiration, make it. Finish your damned story, even if it sucks. (You can’t fix and edit what doesn’t exist.)

9) Tell us 3 of your writing plans for the year ahead.
I am currently wrapping up an Advent story for Dreamspinner Press. I have a story out waiting on a decision from Carina Press right now that is also in the Gem City Grit universe. It is 100% standalone. I am working on another holidy-esque story right now about a builder and a designer, and I have yet another story about a survivalist and a yoga instructor going strong in a notebook.

10) Tell us about your latest release.
Trust Trade came out on January 27th. It is a gritty book full of dark themes and violence, but if you stick with it till the end Jeb and Freddy get their happy ending. Jeb and Freddy meet each other by happenstance, a throwback to my enjoyment of old school romances. I like the random meeting, star-crossed lovers kind of stories, and while Trust Trade isn’t exactly that, Jeb and Freddy are working against a lot to be together. 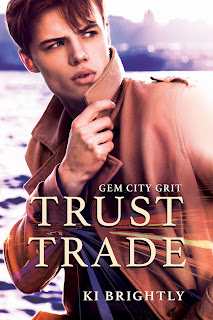 Life hasn’t been good to Jeb Birchman. When he attempted to escape his abusive, zealot father, he found himself on the streets, making a living the only way he knew how, the victim of more violent men—one of whom orchestrates a series of vicious attacks that leave Jeb deaf. Now that he’s aged beyond his latest client’s interest, Jeb knows he needs to escape his risky lifestyle before it’s too late. Seeing one last chance for himself, he earns a GED and enrolls in college.

Freddy Williams enjoys a life that couldn’t be more different from what Jeb has survived. He loves sports, being a personal trainer, and hanging out with friends. The son of deaf parents, Freddy is an outspoken advocate of the Deaf community and works as an interpreter at his college. When he meets Jeb at the bookstore, he’s struck by how attractive he is, and as they get to know each other, he finds Jeb’s good heart just as appealing. By the time he learns of Jeb’s past, it’s only a few steps behind them, and Freddy must make a choice between school and his familiar routine and protecting the man he’s falling in love with.

About the Author
Ki grew up in small town nowhere pretending that meteor showers were aliens invading, turning wildflowers into magic potions, and reading more than was probably healthy. Ki had one amazing best friend, one endlessly out of grasp "true love", and a personal vendetta against normalcy.

Now, as an adult, living in Erie, Pennsylvania, Ki enjoys the sandy beaches, frigid winters, and a wonderful fancy water addiction. Seriously, fancy waters...who knew there were so many different kinds? It's just water...and yet...

Ki shares this life with a Muse, a Sugar Plum, and two wonderful children.