If you could have lunch with any living authors, who would you choose and why?
I would choose Chelsea Quinn Yarbro. I adore her Saint Germain historical vampire series and would love to chat with her about her favourite historical periods and how she goes about her research.

From page 56:
Seneca grabbed my arm and pulled me over to the bar, her attention drawn to the pair of gold wings hanging on the far wall. 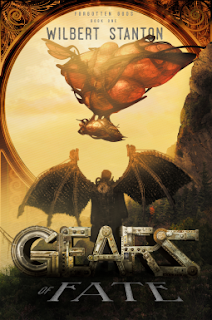 Centuries have passed since the Fey conquered Earth, forcing mankind and gods alike to flee to the sky city Olympus. Forgotten gods walk amongst man, lost and powerless. Little do they suspect a second Fey war looms, and an unlikely duo will set in motion the gears of fate.

Zak Walker is a fringe rat living in the slums who would do anything to protect his sister, Alice. His neglectful father threatens to consign him to a life away from home on an airship, but he yearns for his life to mean something more than drudgery.

Princess Seneca Rose is the last surviving member of the Seelie royals. They tried to establish peace with mankind, but fell to the forces of Queen Mob and the Unseelie Court. Fleeing for her life, Seneca arrives on Olympus in hopes of uniting the forgotten gods against the oncoming Fey.

Zak couldn’t care less about the fate of Olympus, until faeries kidnap Alice. He doesn’t believe Seneca’s stories of faeries or gods, but soon has no choice but to accept their lives are intertwined. All his life, he’s dreamed of something more. If he cannot face the dangers that await down on Earth, the gods, mankind, and his sister Alice are all doomed.