How do you organize your blog in terms of what is in your side bar? Do you have categories and defined sections?
Absolutely. I am a 100% OCD neat freak. I can't stand messy sidebars, nor ones that run on forever. The items in my sidebar are, therefore, carefully chosen and positioned, and I avoid adding new items as much as possible, except for the occasional short-term display if I'm taking part in an event. I have titled section, too, for ease of reference.

Opening sentence:
I know little of my birth, for my mother died long before she could tell me--before I ever heard her voice or gazed at her face--and my father banished the woman who helped deliver me, blaming her for my mother's death.


From page 56:
It was midafternoon when the coach arrived, but there was no room for me except on top, where I was forced to cling to the rail with one hand and my trunk with the other, trying not to shiver in the wind and the cold. 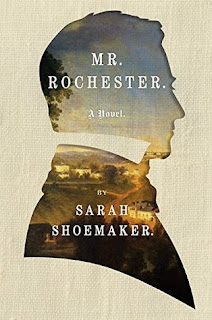 "Reader, she married me."
For one hundred seventy years, Edward Fairfax Rochester has stood as one of literature's most romantic, most complex, and most mysterious heroes. Sometimes haughty, sometimes tender-professing his love for Jane Eyre in one breath and denying it in the next-Mr. Rochester has for generations mesmerized, beguiled, and, yes, baffled fans of Charlotte Brontë's masterpiece. But his own story has never been told.

Now, out of Sarah Shoemaker's rich and vibrant imagination, springs Edward: a vulnerable, brilliant, complicated man whom we first meet as a motherless, lonely little boy roaming the corridors and stable yards of Thornfield Hall. On the morning of Edward's eighth birthday, his father issues a decree: He is to be sent away to get an education, exiled from Thornfield and all he ever loved. As the determined young Edward begins his journey across England, making friends and enemies along the way, a series of eccentric mentors teach him more than he might have wished about the ways of the men-and women-who will someday be his peers.

But much as he longs to be accepted-and to return to the home where he was born-his father has made clear that Thornfield is reserved for his older brother, Rowland, and that Edward's inheritance lies instead on the warm, languid shores of faraway Jamaica. That island, however, holds secrets of its own, and not long after his arrival, Edward finds himself entangled in morally dubious business dealings and a passionate, whirlwind love affair with the town's ravishing heiress, Antoinetta Bertha Mason.

Eventually, after a devastating betrayal, Edward must return to England with his increasingly unstable wife to take over as master of Thornfield. And it is there, on a twilight ride, that he meets the stubborn, plain, young governess who will teach him how to love again.