Today I welcome TJ Nichols to the blog to answer a few questions for Interview³.

1) Tell us 3 fun facts about your writing history
I’ve always made up stories but I never wrote them down. I like creating new worlds and adding magic to this one so urban fantasy and fantasy was a natural fit. I wrote Warlock in Training but then had no idea what to do with it. It was as I was poking around for publishers that I saw Dreamspinner had a call out for their Advent Calendar so I wrote a novella for that and worked on polishing up Warlock. Both went onto be accepted. Since then I’ve written another 2 Christmas/Holiday novellas (Poison Marked will be out in December), as well as a novel for the Order of the Black Knights series.

2) Describe your writing style in 3 words
Um...other people have said it’s descriptive and creative. I always hope I’m writing something enthralling  and just a little seductive.

3) Name 3 of your literary influences
I don’t know that I have any. I have never tried to write like anyone, I’ve always written what I wanted.

4) Share your 3 favourite books
Daggerspell by Katherine Kerr, The Dresden Files by Jim Butcher and Romeo and Juliet.

5) What are your 3 essential writing tools?
Laptop, paper and pen. I do all of my plotting and scheming on paper, so if I get stuck I need to switch from laptop to paper.

6) Where are your 3 favourite places to write?
I write at the kitchen table or sometimes at my desk.  When editing I like to walk on the treadmill as it helps to keep me focussed.

7) Name 3 items on your writing wish list
An agent and a big five deal would be up there. I have a crime series that I’ve plotted out that I really want to write, and a sweeping fantasy novel. Maybe next year.

8) What are your top 3 tips for aspiring writers?
Read everything. Write and learn how to set goals so that the hour of writing time doesn’t become an hour (or 2) on YouTube watching male ballet dancers.

9) Tell us 3 of your writing plans for the year ahead
I’m writing the third and final Studies in Demonology book at the moment (yay! But also sad because I’ve grown very fond of Angus and Saka). I’m also going to tackle either the first crime book or the fantasy. And I have to clean up a historical urban fantasy that I wrote earlier this year.

10) Tell us about your latest release
Olivier (an Order of the Black Knights novel) came out in July. The Order of the Black Knights is a multi-author series about a group of men who are trying to break free of a curse, the catch is in every life they kill the one who could save them when they need to forgive. I like the idea of past lives and thought the concept was interesting (if a little darker and less magical than what I usually write). Olivier is a pretty damaged hero who knows he can’t keep living the way he has been, but doesn’t know how to change…until Cody appears in his life. On one hand Cody threatens everything, but on the other he could save Olivier. However Olivier has just killed Cody’s brother so things are tense and messy and the lust they have is a prickly kind of thing best handled with care. 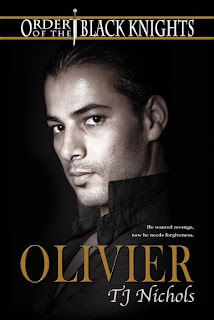 Olivier Merlo works for a dangerous man. He does what he’s told without asking questions because he needs to protect his sister and niece. When someone gives his boss trouble, Olivier does what he does best. It’s a routine hit—until the victim’s brother starts poking around.

Cody Anders left his family behind a decade ago—along with their wealth and influence—to live on his own terms. Still, he knows his twin didn’t die of a drug overdose, and he’ll do anything to find the truth. What he uncovers is a conspiracy that will topple his family and leave him staring down the barrel of a gun.

Olivier must decide if he’s going to obey orders or free himself from the curse that has guided his hand for centuries. Cody, who challenges Olivier’s notion that no one can love him, holds the key to breaking his chains. But when the truth finally comes out, it might be more than Cody can accept.

About the Author
TJ Nichols is an avid runner and martial arts enthusiast who first started writing as child. Many years later while working as a civil designer, TJ decided to pick up a pen and start writing again. Having grown up reading thrillers and fantasy novels, it’s no surprise that mixing danger and magic comes so easily, writing urban fantasy allows TJ to bring magic to the every day. TJ enjoys writing novellas and novels and has a series, Studies in Demonology, coming out with DSP Publications.
With two cats acting as supervisors, TJ has gone from designing roads to building worlds and wouldn’t have it any other way. After traveling all over the world and Australia, TJ now lives in Perth, Western Australia.