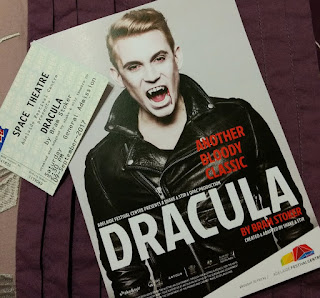 Yesterday, I attended the matinee performance of Dracula. The play offered a faithful but condensed version of Bram Stoker's novel, and it worked well on the Space Theatre's intimate stage.

Managed with a cast of just six, the play lasted just over an hour and a half, without an interval, and I was riveted throughout.

Some of the best features of the production were:
The only main negative point for me was the costume Dracula wore in later scenes. It felt too anachronistic for him to sport a leather jacket when, in all other respects, the production kept to a fairly period look in terms of costumes, props, storytelling. There were also a few moments when actors emphasised words that sounded funny in a modern context. However, if they'd not stressed them, it probably would have gone unnoticed. However, those are minor niggles. Overall I left the theatre having had an enjoyable experience.

Dracula is playing until 16 September, so if you're in Adelaide, I highly recommend you grab a ticket.