Have you ever bought a book because you liked its cover art?
Yes and no. I haven't bought a book only because I liked the cover art; however, if I see a book whose cover art appeals to me, I will go over and check it out. I'll read the blurb, and if that catches my interest too, I may end up buying it. So that's why I say both yes and no. Cover art might attract me to a book initially, but I would then consider other factors before parting with my money.

From page 56:
She wasn't sure if it was the drugs, the beer, or a combination of both, but Henley had been super uncooperative at two in the morning. 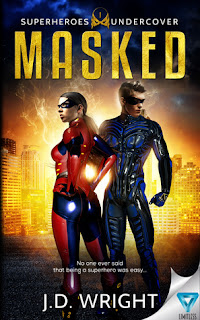 Vada Lawson can’t wait to be a superhero. Born into a family with special powers, she’s been training to fight criminals and villains her whole life. But her indoctrination into the underground super community is derailed when normals start breaking out in superpowers themselves.

Not trained to control their new abilities, the normals are frightened and vulnerable. Then their mutilated corpses begin turning up all over town. What the heck?

Somehow, with the help—and hindrance—of an annoying newly-minted super named Orion, Vada has to stop the chaos before it destroys her and everything she holds dear…and ruins her superhero debut.

No one ever said that being a superhero was easy…