Today I welcome Peter Wood to the blog to answer a few questions for Author Interview³.
This will be the last in my Author Interview3 series for 2017. However, they will return in February 2018!

1) Tell us 3 fun facts about your writing history
When an acquaintance walked into my house and saw the thousands of books I’ve collected over the years he said I must have so many ideas stored in my mind I should try writing a book of my own. The comment struck a powerful chord and after it had simmered away for a few years I took the plunge..
In my first novel I described a fictional piece of music of the First Australian people and then had to reply to queries about where to find it.
My first novel, Attunga, was described, at various times, as being fascist, sexist and culturally appropriative, all of which are so far from the truth they make me smile.

3) Name 3 of your literary influences
The first memory I have of a literary influence was the Myths and Legends section of the Arthur Mee Children’s Encyclopaedia I used to pour over in my early years.
Two other powerful influences have been the works of J R R Tolkien and H Rider Haggard.

5) What are your 3 essential writing tools?
First – my special soft grip pen and the day to a page diaries I use to write first-drafts in longhand.
Second – Dragon Naturally Speaking, the speech recognition program which saves this two finger typist from hours of tedium.
Third – my Word Processor (Libre Office by preference) without which the processes of revision and correction  would be a nightmare.

6) Where are your 3 favourite places to write?
One – The tin shed – friends have a shack on a block of land near the Otways National Park and the ocean and the lack of power means there are none of the day to day distractions like tv, shops, movies or people.
Two – My cosy room, with a heater for the winter when it’s too cold to go to the shack, and a window with a view of the local mountains.
Three – when I travel I write in the annex of my tent, looking out on the beach or bush of the wild places I like to visit.

7) Name 3 items on your writing wish list
I’d like to explore the fantasy side of speculative fiction a lot more.
Marketing is the bane of  this indie author’s life. I’d love to find someone to take over this side of things and allow me to concentrate on my writing.

8) What are your top 3 tips for aspiring writers?
One – Read. Read. Read.
Two – Write. Write. Write.
Three – Decide why you want to write and write accordingly. Is it for your own pleasure, to please others, or maybe a mixture of both?

9) Tell us 3 of your writing plans for the year ahead
Plan one – Finish the urban fantasy I’m currently about half way through – elves and magic set in Australia as well as a number of elven realms.
Plan two – Make a start on the third novel of the Terran Diaspora series. This will most likely be a sequel to Attunga, the first novel.

10) Tell us about your latest release
My latest release is called Mparntwe. (Mparntwe is the First Australian name for Alice Springs.)
It is the second release in the Diaspora series but is actually a prequel set a hundred years earlier than the 23rd century of the first book.
Mparntwe describes how two young friends change the world for the better with their involvement in the  development of the first benevolent Artificial Intelligence. There is a gentle treatment of disability involving both the characters, Jarra and Mirrigan, who have adventures in a number of distinctly Australian settings – the outback near Alice Springs and the Grampians Range in Western Victoria. Mparntwe is traditional science fiction. 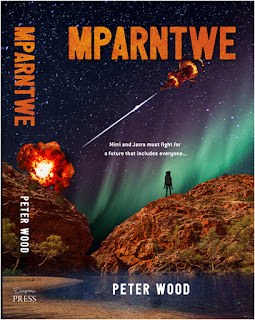 Mparntwe
Peter Wood
Diaspora Press
17 September 2017
344 pages
The story is for general reading and suitable for both YA and older.

Mirri and Jarra join with an AI to fight for a future which includes everyone…
Jarra and Mirrigan, both with serious disabilities, both with serious abilities, experience and influence events which change the world.
Set in Central Australia, Mparntwe is the heartwarming tale of two young people who face hostile forces of power and greed.

About the Author
Peter Wood 1944-
As a youngster I lived in numerous country towns with my peripatetic family (I'm the son of a preacher-man) then as a teacher I moved all over the place as well, and all in all I have lived in sixteen different towns and suburbs.
Reading has been dominant all my life and the first full novel I can remember reading is Jules Verne's Twenty Thousand Leagues Under The Sea at age eight.
Sci-fi, and later fantasy, continued as a major focus, and suffering from a kind of collector's bug, my sci-fi/fantasy collection has grown to almost six thousand titles.
I like to think I have an adventurous nature and holidays and leisure time involved beach, mountain, extensive hiking, and travel expeditions.
In my twenties I became hooked on the magic of photography and spent a fortune on color slides and equipment for developing black and white photos and that fitted really well with all the exploring.
My teaching has been quite varied, mostly as a generalist in the primary level, but also as a computer teacher and as a maths teacher across the secondary level. For a number of years I was a mentor for gifted children.
Travel is a great love and I've managed visits to Noumea, Fiji, the USA, New Zealand, and Bali as well as a seven month trek around Australia.
When it became possible to own a real computer I was hooked and learned Fortran, Pascal, a tiny bit of assembler, and various versions of the Basic computer language, developing enough facility to produce some educational software and even a fully functional science fiction adventure game.
A few years ago I did some study and learnt a smattering of the web-programming languages – html, CSS, VB, javascript and java.
It's only in recent years that I have put my hand to writing, and I wish I'd started forty years earlier.