Today is an exciting day because it's the release of the To the Victor anthology from Less Than Three Press, which includes my story 'Damsel in Distress' (writing as Asta Idonea). Find out more below! 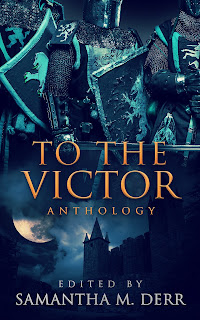 In this anthology, knights, lords, ladies, and royalty collide as tournament and quests are faced in the name of love.
(See all story synopses below.)

Excerpts from Damsel in Distress by Asta Idonea:

To Rescue a Princess by Annabeth Leong—All the knights of the realm are invited to compete to win the hand of Princess Cordelia by rescuing her from a dragon, and Sir Elizabeth, the only female knight, demands to be included. Princess Cordelia, however, doesn't want her dragon to be killed and has mixed feelings about being rescued and won.

Damsel in Distress by Asta Idonea—When King Wybert holds a joust to choose a suitable husband for the princess, foreign knights journey to the court to compete. Ser Hemming is drawn to one of their number—Ser Estienne. Then the kidnapping of the princess puts loyalties and loves to the test...

Wolf Knight by C.C. Bridges—It should be a simple assignment: Renne has only to escort a noblewoman to Castle Graymore for the celebration of fifty years of peace. But the noblewoman is really a princess bound for marriage, and no good can come of a princess and a knight falling in love...

Pipsqueak by L.S. Engler—Squeak is used to being thought of as unremarkable. Too small, too slight, too unremarkable. Never enough of anything. He's hoping the Tournament of Champions will give him a chance to prove he's more, not less. Then the princess gets kidnapped.

My Brave Knight by Daniela Jeffries—When they meet at a joust, it is love at first sight for Amir, a Moorish knight from Italy, and Miryam, the wealthy daughter of Algerian merchants. But romance doesn't do well when there's a secret, especially if the wrong person learns it...

Debating the Dragon by Meredith Katz—Dame Ismay Wexley (May, to her friends) is like any other knight: she wants to win love and glory, and be known far and wide for her great deeds. Too bad she has to work three times as hard as her male peers. It's with this in mind that she decides to take on a great quest: to rescue a princess trapped in a tower and guarded by a fierce dragon...

For Queen and Country by Kayla Bain-Vrba—Kyrrin is a knight of the Queen's Guard and has sworn to protect the Queen with his life. When the Queen falls ill from some magical malady, the entire kingdom rallies to her cause, but to no avail. Just when he is about to lose all hope, Kyrrin is given a map to a magical flower that just might save his Queen.

Perilous Knights by Charles Payseur—Sir Lamorak might be a knight from an influential family, but ever since he ran away from home with only his younger brother Percy and older squire Ruwena, he's struggled to stay out of trouble. In serious debt to a nefarious knight, all Lam's hopes rest now on winning a major tourney...