Today I am thrilled to welcome David C. Dawson to the blog to share his new release, The Deadly Lies. 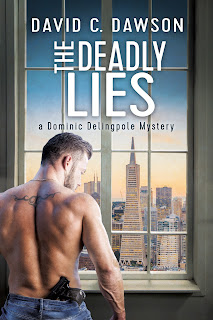 So, this is really exciting, and I’m so grateful to Nicki for having me today! It’s a whole year since my debut book The Necessary Deaths was published, and in that year it’s been well received by readers, and won an award for best Mystery & Suspense in the FAPA awards! Not bad for a rookie. So today I’m grateful to Nicki for letting me share the details of the second book in the Dominic Delingpole Mystery series. I’ll also take a moment to tell you a bit about myself.


So this is me:
I live near the university city of Oxford in the UK. The Deadly Lies is my second novel. I’ve just finished a third book, which is a new romantic suspense. I’m also writing the third in the Dominic Delingpole mystery series.
As well as being a writer, I’ve been a radio journalist, for which I won a couple of awards, and a TV documentary maker.
While I did all that, I travelled a lot. Thanks to the BBC, I’ve filmed in nearly every continent of the world, and I’ve lived in lots of different places: London, Geneva and San Francisco. Now I prefer the Oxfordshire countryside, it’s a bit quieter!

How do I relax?
I like to ride around Europe on my ageing Triumph motorbike. I also sing with the London Gay Men’s Chorus, of whom I’m intensely proud. Our aim is to combat homophobia through the power of music. We’ve sung at St Paul’s Cathedral, The Roundhouse and the Royal Festival Hall. But I’m proudest of the time we sang at the House of Lords, campaigning for equal marriage to be legalized in the UK.

And so to The Deadly Lies…
In the first book in the series, we met Dominic Delingpole. He’s a country lawyer living near Oxford in the UK. He’s in love with Jonathan McFadden, a landscape gardener and occasional opera singer.
In this second book, they’re on their honeymoon in Sitges in Spain. It’s a fabulous gay friendly report I’ve visited many times.
But Dominic has a dark secret…
At the start of the book, we learn Dominic has a secret rendezvous with his former lover, even while he’s on his honeymoon. But the lover is killed, and his death plunges Dominic and Jonathan into a series of adventures… and a series of lies. At the climax, they are in San Francisco, fearing for their lives.
Their old adversary Janet Downpatrick is back, and a wonderful new couple called Alfonso and Gabriel. They’re married and about to have a surrogate baby.

What next, is there more to this series?
I’ve mapped out the story arc for the five in the series and I’m onto the third book. This one takes Dominic to Berlin, where he’s reunited with an important member of his family, who you’ll meet in the second book…
Meanwhile Jonathan is in grave danger, and Dominic is forced to choose between his husband and this family member.
I’ve just handed in the manuscript for a new romantic suspense to Dreamspinner Press. This book features two new characters, an Englishman called Rupert Pendley-Evans, and his American boyfriend Luke Diamond. Luke’s lost his memory, and has a dark secret he discovers about himself…

Excerpt
Dominic and Jonathan stood side by side on the sand, sharing the beauty of the moonlight dappling the surface of the sea. The air was warm and still; the hubbub of Sitges nightlife sounded muted and distant. Dominic slipped his fingers through Jonathan’s, squeezed his hand tight, and kissed him on the cheek.
“Thank you, Jonathan.”
“What for?” he asked. “I haven’t done anything yet. I may yet need to protect you from the perils of the night. I anticipate we will imminently be attacked by international drug smugglers or carried off by white-slave traders to be sold in the markets of Morocco as the playthings of Arab oligarchs.”
Dominic laughed, rested his head on Jonathan’s shoulder, and watched the moon-silvered waves lap the shore.
“I think I want to say thank you for so many things. You make me very happy. And I feel guilty I wasn’t honest with you about this evening, or the meeting earlier—”
“What meeting earlier?” Jonathan turned to look at Dominic. “So your visit to the antiques shop was just a cover story, was it?” His face appeared severe, but Dominic was certain it was mock anger. He knew Jonathan too well.
“No, not entirely. I did go to the antiques shop, and I did find the gift for you I was looking for. But the reason I didn’t tell you about the meeting—”
“Dominic, stop.” Jonathan kissed him gently on the lips. “We all have convenient lies to tell from time to time. I am confident—no, more than that—I know you love me enough not to want to hurt me. I know there’s some good reason for your secrecy. I love you and I trust you. You don’t have to say any more.” He looked into Dominic’s eyes. “But if I find it’s another man—”

About the Author
David C. Dawson is an award-winning author, journalist and documentary maker. He lives near Oxford in the UK with two cats and his beloved Triumph motorbike.
He writes mystery & suspense, with men in love at the heart of each story. His books have been described as “real page-turners” and “un put downable”.
One reviewer for his latest book The Deadly Lies described it as “very sexy”.
He campaigns hard for equal rights, and sings with the London Gay Men’s Chorus.