Book Review: The Art of Star Wars - The Last Jedi by Phil Szostak 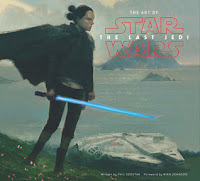 Star Wars: The Force Awakens shattered box-office records as one of the highest-grossing films of all time, and its eagerly awaited sequel, Star Wars: The Last Jedi, is sure to do the same. Written and directed by Rian Johnson and production designed by Rick Heinrichs, this chapter, like every chapter before it, owes its visual language and fully imagined cinematic landscape to an incomparable art department: the Lucasfilm “visualists.” The Art of Star Wars: The Last Jedi explores their vision and illuminates their creative process in stunning detail. Featuring concept art and costume sketches, storyboards, and blueprints, fans will take a deep dive into the development of the fantastic worlds, characters, and creatures—both old and new—of The Last Jedi. Featuring unforgettable art and exclusive interviews with the filmmakers, this visual archive highlights moviemaking magic at its finest. (Goodreads Synopsis)


There are many things to love about the book. The artwork is stunning and it is all beautifully presented. However, I am only giving it four stars rather than five because of how much is missing. There's very little artwork relating to major plot moments such as Rey and Kylo's force bond (only one picture in 256 pages) and nothing showing the lightsaber duel with the Praetorian Guard. Indeed, considering he's a main character, there are but a handful of pictures of Kylo Ren in general. I can only assume this was an attempt to avoid spoilers in the book, but I would really prefer it if they released the book a little later and then included everything, as it's frustrating to see all the gaps. Nevertheless, this is still a nice collector's book for fans of the franchise.