Do you read hardcovers with the dust jacket on or off? Why or why not?
I keep them on. I can't say why exactly; it's simply never occurred to me to take them off.

Opening sentence:
Tesara woke with a gasp, blinking in the dim candlelight, as her mother shook her awake.


From page 56:
No matter how bad he was, he somehow always managed to make her feel as if she were worse than he was, when in reality they were the same, the two ne'er-do-wells who were forever making mistakes and always being taken to task. 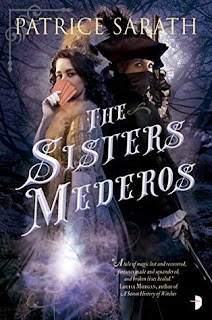 Two sisters fight with manners, magic, and mayhem to reclaim their family’s name, in this captivating historical fantasy adventure.

House Mederos was once the wealthiest merchant family in Port Saint Frey. Now the family is disgraced, impoverished, and humbled by the powerful Merchants Guild. Daughters Yvienne and Tesara Mederos are determined to uncover who was behind their family's downfall and get revenge. But Tesara has a secret – could it have been her wild magic that caused the storm that destroyed the family's merchant fleet? The sisters’ schemes quickly get out of hand – gambling is one thing, but robbing people is another…

Together the sisters must trust each another to keep their secrets and save their family.