Night Traveller is the seventh book I’ve written set in my world of the Aurigan Space Saga, featuring space patrol officers and the men who love them. All the main characters are new for this book and it can easily be read as a standalone story. All my books contain a little bit of spice but this is the first one I have rated suitable for 18+.

Packed full of intrigue, action and romance, I hope you enjoy Night Traveller. 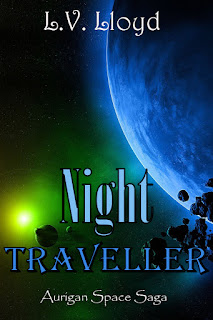 Lieutenant Mike Oliver has long dreamed of a Patrol ship berth, flying between the stars—surely this time his application will be successful. What he doesn’t expect, is to be sent to establish a Patrol station on Asra, a tiny mining settlement on a frozen mudball of a planet, blanketed with nitrogen storms.

Deeply resentful, Mike suspects he is being discriminated against. The only option he can see is to become celibate, at least while he is on Asra. And that means rejecting the advances of both Callan Rian, the colony’s flamboyant Governor, and sexy Dane, Callan’s business partner, despite the growing attraction.

While sexual tension mounts between them, a far more sinister danger is lurking, and when Callan is abducted, Mike will have to choose—between his ambition and his heart.

Excerpt
Callan Rian hadn’t deliberately set out to avoid the new Patrol man, but he hadn’t made any effort to seek him out, either. An unexpected trip to Capella to check out a new piece of surveillance technology had taken a couple of days and then things had just seemed to crop up that required his personal attention. And today was his birthday. He wasn’t doing any business on his birthday, at least nothing that required him to dress in a singlesuit and look serious and official.

Tonight Dane had organised a “surprise” party for him at the Rising Sun. Callan fully intended to wear his most flamboyant outfit—purple shimmersilk pants with a shocking pink sleeveless vest to be precise—and drink a lot of very expensive brandy. And if the oh-so-straight Patrol officer happened to turn up and didn’t like it, well that would be just too damn bad.

Dane Trenwith watched Callan enter the room, instantly becoming the centre of attention of the small crowd of friends and well-wishers. Callan looked hot tonight, he thought with a wry grin. He’d tried to convince him the purple shimmersilk was over the top but Callan had ignored him and for once Callan had been right. It was a dark purple, almost black and the slippery material showed the shape of his strong thighs only too well. He had changed the colour of his hair to match his trousers and it hung thick and glossy to his shoulders. Dane sighed unconsciously. There were times, like now for instance, when he wished they were still lovers as well as business partners.

But Dane also knew it wouldn’t last, he simply wasn’t a one man man. Well, not for long anyway. He liked variety, and freedom, freedom to pick up a cute boy for a night, or more, without feeling guilty about it. He couldn’t understand how Callan could be happy limiting himself to just one man for a whole year, or even longer. The very idea made him feel claustrophobic. He knew they were better off as friends, not lovers but... He sighed again. Time for another drink. He turned and signalled to the bartender.

Then he caught sight of the stranger, hovering on the edge of the party. Dressed in black pants and a black shirt matching his night dark hair, his light brown skin was the only touch of colour about him. Dane stared open-mouthed. Luckily he took a second look before allowing himself to drool openly. Damn. Who would ever have dreamed the Lieutenant would scrub up like that? It wasn’t fair.

He’d met him briefly a day or two ago when Serra Yoshida had grabbed Dane by the arm and introduced them. Except then the other man had been in his uniform, just another Patrol officer that he wanted to avoid. Everyone knew the Patrol had a thing against oms. He’d heard people say oms weren’t even allowed to join the sacred ranks, not unless they lied about their sexuality. It gave Dane the creeps just thinking about it.

He wondered if Callan had met the Patrol officer yet. He didn’t think so, he hadn’t said anything to him about it. He looked around for his partner and was just in time to see Callan slip out of the room. Sneaking off for a smoke, he guessed. Smoking didn’t kill people any more like it had in the past, but it was considered an unpleasant habit, something to be done in the privacy of your own home and not in public.

A wicked thought popped into Dane’s head. He strolled casually over to Oliver. “Have you met our illustrious Governor yet?” he asked with a lazy smile.

“No. So far we’ve managed to miss each other,” the Lieutenant’s voice was dry.

“He’s just stepped outside for a minute if you want to catch him alone,” Dane offered, looking as innocent as possible. The other man nodded, politely. “Thanks.”

About the Author
After thirty years of working with the unemployed, coping with threats, tears and broken lives (and these were only from fellow staff), LV Lloyd decided it was time to make her escape. And what better place to go than the world of m/m romance? She started writing Dangerous Tension, her first ebook in the Aurigan Space Saga, years ago, but put it aside due to work and family commitments.

In 2012, she dusted off the foolscap pages stored under her bed, finished the story and turned it into a book. Since then, she has written six more ebooks in the Aurigan Space Saga series, and numerous short stories; including her recent novella, Gothic Romance, a venture into the genre of Regency Romance.

LV Lloyd lives in Adelaide, Australia, with her family and two cats. In her spare time she enjoys fishing and visiting the many local wineries.

You can visit her at www.lvlloyd.com