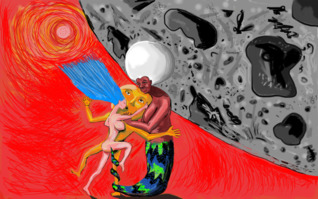 Welcome to the future, to the year 4377, a perfect utopia where everyone is rich and lives in peace. Litterbot409 is a cleaning robot working for a family of seven. His garbage can body is able to transform into any tool to handle any mess, but there are none in a world with spill-proof containers. This society doesn't have sexism, guns, money, names, or unanswered questions, and life is pretty boring, until Litterbot discovers a strange glow in the sky, which changes colors throughout the day, amazing the world. Troll, the world's leading hydrologist/interior decorator, discovers the cause: the Sun is getting hotter, and water is evaporating into space and going to run out in 103 days! The world prepares for mass evacuation. Tension builds when acts of aggression start to break out, something that hasn't happened in a long time. The family (two mothers, three fathers, and two kids) constructs a ship, as the sky colors intensify, tinting everything, and affecting everyone's minds. They must overcome agitation during periods of red, sedation in times of green, and irritability when it's blue, to finish in time. But ever-increasing radiation interferes with their equipment, and eventually causes them to mutate, which helps them work faster, but crashes world-computer, forcing them to search for paper books. As if that weren't enough, the moon grows bigger and bigger, and orbits faster and faster, until cataclysmic gravity, winds, and PMS strand them in a solar powered ship with no light.


When the author approached me to review The Day The Sun Changed Colors, at first I hesitated, since I am not a big sci-fi reader. However, the promise of humour decided me, seeing as I do enjoy things like Red Dwarf and The Hitchhiker's Guide to the Galaxy. And the book was funny. I should say that straight off the bat. The situation in which the characters found themselves led to some amusing scenarios as they tried to make sense of the changing world, and their changing bodies and moods. I smiled many times at their conversations and actions. Nonetheless, I never really connected with the story on a deeper level, and I think part of that was the amount of science-talk involved. Science has really never been my thing, and though I could follow the discussions in general, many of the details didn't mean anything to me and were just a lot of confusing numbers etc. I am therefore giving this book three stars. There were things I liked about it--the humour, the premise etc.--but overall it wasn't a good fit for me. I can see more science-minded people getting a real kick out of it though, so I would recommend it to hardcore sci-fi fans who are looking for something a little zany and different.