What do you think your blog says about you?
Well, I certainly hope it shows my love for both reading and writing. It doubles as a book blog and the website for my own writing, so I try to keep the bulk of the content related to those two things, along with the occasional additional post for my other interests such a theatre, cinema, and sketching. It's neatly presented, which reflects my love of organisation. Perhaps it's easier to ask those of you commenting what you think it says about me! :)

Opening sentence:
Once a term the whole school went for a walk--that is to say the three masters took part as well as all the boys.

From page 56:
He could control the body; it was the tainted soul that mocked his prayers. 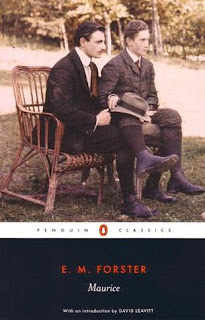 Maurice Hall is a young man who grows up confident in his privileged status and well aware of his role in society. Modest and generally conformist, he nevertheless finds himself increasingly attracted to his own sex. Through Clive, whom he encounters at Cambridge, and through Alec, the gamekeeper on Clive's country estate, Maurice gradually experiences a profound emotional and sexual awakening. A tale of passion, bravery and defiance, this intensely personal novel was completed in 1914 but remained unpublished until after Forster's death in 1970. Compellingly honest and beautifully written, it offers a powerful condemnation of the repressive attitudes of British society, and is at once a moving love story and an intimate tale of one man's erotic and political self-discovery.