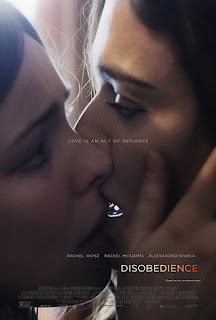 A woman returns to her Orthodox Jewish community that shunned her for her attraction to a female childhood friend. Once back, their passions reignite as they explore the boundaries of faith and sexuality. (IMDB Synopsis)

Disobedience is a film I really wanted to like more than I did. It tackles an important topic, yet it felt like the film knew that and was too self-aware of what it was trying to do all the way through. This resulted in characters who fell flat, despite the excellence of the actors playing them. Ronit received some fleshing out, but not enough, while Esti was never more than the token timid woman trapped in a marriage she hadn't wanted. Many elements of the plot also seemed clichéd and therefore failed to pack enough emotional punch. There were things I liked (e.g. the fact the film didn't shy away from the sexual side of things), and Weisz and McAdams did what they could with what they were given, but overall it didn't come together in the way it could have. For me, this is 3.5 stars. It's worth seeing, but don't expect to be blown away.