Today I welcome Casey Wolfe to the blog to answer a few questions for Author Interview³.

1) Tell us 3 fun facts about your writing history
A lot of the first things I wrote in middle school were short stories about my friends and I (and my dog) going on various adventures - be it evading a serial killer while trapped in the mall or flying on a NASA shuttle to a space station to thwart a bad guy.
I like to sneak in quotes and references to my favorite movies, shows, and video games. Seriously, if something sounds familiar, it’s likely you’ve caught my inner geek coming out.
I track my writing progress by using stickers, rewarding myself with certain colored stickers for certain tasks - editing, outlining, word count, etc. Recently, my husband bought me new star stickers and has started to give me gold stars even when I don’t hit a word count goal for the day, as long as I wrote something. He says it’s because I gave it my best effort and I have more now than I did when I started.

2) Describe your writing style in 3 words
Fluffy, romantic, and light-hearted.

3) Name 3 of your literary influences
I think one of the first authors to really inspire me as a young writer was Amelia Atwater-Rhodes. Honestly, though, I’m more influenced by film-makers, believe it or not. To that end, I’ve been influenced a lot by the likes of Steven Spielberg, Bryan Fuller, Gene Roddenberry, and so many others.

4) Share your 3 favourite books
How to Howl at the Moon by Eli Easton, According to Hoyle by Abigail Roux, and Hawksong by Amelia Atwater-Rhodes.

5) What are your 3 essential writing tools?
Computer, a cup of tea, and music or a movie on in the background.

6) Where are your 3 favourite places to write?
I mostly write in my living room, in my overstuffed recliner - I’m seriously jealous of other authors’ awesome dedicated writing spaces. If the weather allows, I’ll write on the porch. Sometimes I go to a cafe or the library for a change of scenery.

7) Name 3 items on your writing wish list
I really want to write some historicals - preferably WW2 and/or western. I wouldn’t mind tackling a sci-fi book either - something in outer space or colonizing other planets, most likely, or even involving androids. That one would be a little more difficult for me, but I’m up for the challenge.  Last but not least, I think the ultimate “secret dream” of all writers: get a film/TV adaption made.  Maybe I might be better off just writing a screenplay instead, HAHA.

8) What are your top 3 tips for aspiring writers?
Never give up. Practice, practice, practice. Don’t be afraid to put yourself out there - whether that’s going to a writing group, getting beta reader feedback, entering a contest, or submitting for publishing.

9) Tell us 3 of your writing plans for the year ahead
My goal is to keep plugging away at the other two books in the Inquisition Trilogy, hopefully completely book two before the year’s out. I also have plans to put an audiobook of A Mage’s Power into motion, though it won’t release until 2019. While not specifically writing, I’m looking at getting out to as many libraries, bookstores, and events as I can to meet up with readers to talk about my books, writing, and whatever else.

10) Tell us about your latest release
A Mage’s Power is the first book in my new paranormal fantasy trilogy. It’s set in a modern alternative universe where humans and other fantasy races have lived openly side-by-side for centuries. The trilogy follows the same group of friends, but each book focuses on a different couple with its own subplot that feeds back into the main storyline of the trilogy. This book is about Rowan, a master mage, and Shaw, an inquisitor with the Inquisition. They’re the organization in charge of policing magicae - all the magical races - and as such serve as an antagonist of the series. 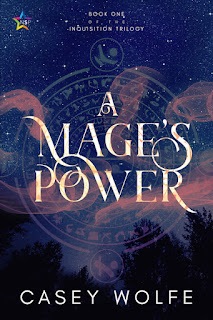 Built on the bones of an ancient city, modern-day Everstrand is where master mage, Rowan, has set up his enchantment shop. When not hanging out with his werewolf best friend, Caleb, or studying, he dabbles in herbology and the controversial practice of blood magic. A prodigy who has already earned two masters, Rowan’s bound and determined to reach the distinction of grandmaster, a mage who obtains a masters in all five Schools of Magic.

Shaw works for the Inquisition, the organization charged with policing the magical races collectively known as magicae. Recently, it has come under scrutiny as magicae begin to disappear and reports of violence increase. With secrets of his own on the line, Shaw is willing to risk everything to find out just what is going on behind all the locked doors.

When Rowan and Shaw are entangled in each other’s worlds, it becomes evident that their hearts are as much at risk as their lives. They must find the truth and stop a conspiracy before it’s too late.

About the Author
For Casey, writing equals existence.  History nerd, film enthusiast, avid gamer, and just an all-around geek.  Casey has been known to spend a lot of time dancing around the kitchen to music while cooking.  Add in an unapologetic addiction to loose-leaf tea, and you get the general picture.  Married, with furry, four-legged children, Casey lives happily in the middle-of-nowhere, Ohio.