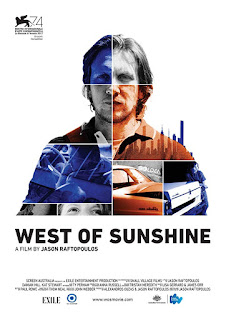 A father has less than a day to pay back a debt to a violent loan shark, while looking after his young son. (IMDB Synopsis)

West of Sunshine is a film of understated psychological depth, propelled by excellent performances from both Damian Hill and young newcomer Ty Perham. The score played an important role, too, creating a dreamy feel to the earlier scenes before helping to racket up the tension as the story progressed. The movie addressed many important issues from family relationships (notably father and son) and forgiveness to gambling addiction, but it did so without ever coming across as 'preachy'. The editing was tight, the script was nicely nuanced, and overall it was gripping viewing. It's a film I am glad I have seen; however, I don't think I'd be drawn to repeat watches. Once was good, but once was enough. This one is worth a look if you like intense, small-scale, realistic drama.

With thanks to Palace Nova for the free reviewer's ticket.