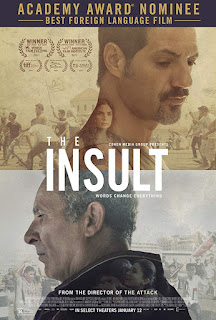 After an emotional exchange between a Lebanese Christian and a Palestinian refugee escalates, the men end up in a court case that gets national attention. (IMDB Synopsis)

The Insult is a film I probably wouldn't have seen had it not been on my list from Palace Nova when they made me Movie Reviewer of the Month. However, I am grateful for having had the opportunity and incentive to view it, as it was a powerful drama that had an important message to share. The film highlights how quickly and seriously a small disagreement can escalate, and that is a timely reminder, considering all the things happening in the world these days. The performances throughout were excellent, but especially from the two leads, and I thought the movie had spot-on pacing. In many ways it paints a bleak picture, but there is a spark of hope at the end that makes you leave the cinema quietly optimistic rather than downcast. Where I thought the film excelled was in the way it made you feel sympathy for both characters at different times, so it was hard to 'pick a side' and declare one was right and the other wrong. That says a lot about so many disagreements, whether on a small level or on the world stage. I am giving this 4.5 stars. If you enjoy hard-hitting drama, then this is a film you'll want to check out.

Thanks to Palace Nova cinemas for the free reviewer's ticket.