Today I am thrilled to share the Beneath Yggdrasil's Shadow anthology, which includes my short story 'A Handmaid's Purpose'. 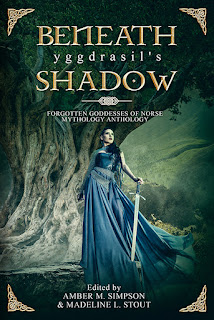 Norse mythology has a fascinating take on the universe and a pantheon of amazing gods and goddesses. Although there are many stories that have survived the ages, there are several tales that were lost to time.

This anthology focuses on stories about Norse goddesses that have been mostly forgotten. There are many goddesses that we now know very little about, their origins erased from history. Who are these barely mentioned goddesses? Where did they come from? These are the stories that history did not remember.

Featuring 23 stories about Norse goddesses such as Sigyn, Ran, Idun, Nott, Eir, Angrboda, and many more!