Do you have a YouTube channel? If so, do you post book review vlogs?
Indeed I do! It's HERE, in case anyone is interested. I post a mix of content, but on the book-reading side of things, I have a series in which I discuss the classics (one author per video) and at the end of every month I post Nicki's New Reads, in which I talk about the books I've read that month.

Opening sentence:
I sat on the rough stone wall, gazing down the dusty road and grinding my heel against the rocks.

From page 56:
I threw the rock. And watched, unsurprised, as the trailing, swaying vines struck at it like a nest of snakes, thrashing, writhing, lashing like whips until the rock I'd thrown crumbled and fell in a shower of gravel. 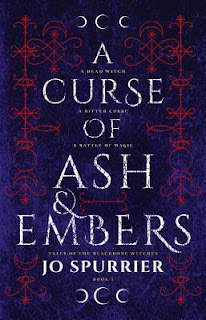 My Current Read
A Curse of Ash & Embers
Jo Spurrier

A dead witch. A bitter curse. A battle of magic. Some people knit socks by the fire at night. Gyssha Blackbone made monsters.But the old witch is dead now, and somehow it's Elodie's job to clean up the mess.When she was hired at Black Oak Cottage, Elodie had no idea she'd find herself working for a witch; and her acid-tongued new mistress, Aleida, was not expecting a housemaid to turn up on her doorstep.Gyssha's final curse left Aleida practically dead on her feet, and now, with huge monsters roaming the woods, a demonic tree lurking in the orchard and an angry warlock demanding repayment of a debt, Aleida needs Elodie's help, whether she likes it or not.And no matter what the old witch throws at her, to Elodie it's still better than going back home.