Today I welcome E.S. Yu to the blog to answer a few questions for Author Interview³.

1) Tell us 3 fun facts about your writing history
1.  I’ve wanted to write speculative fiction since I was a child, as I love escaping to other worlds.
2. I used to believe I’d always be a fantasy writer, but lately I’ve been gravitating much more toward science fiction.
3. I wrote Eidolon during law school – which was a hectic experience that I definitely do not recommend!

4) Share your 3 favourite books
If I had to pick only three…
1. The Epic Crush of Genie Lo by F.C. Yee
2. Heart of Iron by Ashley Poston
3. Defiant Loyalties by Elizabeth Wilde

5) What are your 3 essential writing tools?Laptop, green tea, and music.

6) Where are your 3 favourite places to write?
I write at my desk at home, nothing too exciting. My dream spot for writing would probably be by the beach – either Cape Cod in Massachusetts or on an island.

7) Name 3 items on your writing wish list
1. To write a space opera with a non-western cultural background.
2. To write a queer romance starring two Asian American leads.
3. To have an audiobook of Eidolon.

8) What are your top 3 tips for aspiring writers?
1. Read a lot.
2. Write as much as you can.
3. Never stop reflecting on how to improve your craft.

9) Tell us 3 of your writing plans for the year ahead
1. Finish polishing a queer paranormal romance that will hopefully be released early next year!
2. Outline a sequel to the paranormal romance.
3. Ideally, start drafting a YA novel that’s been kicking around in the back of my head.

10) Tell us about your latest release
In a nutshell, Eidolon is a science fiction M/M enemies-to-lovers romance starring an assassin who reluctantly teams up with a journalist—after having tried and failed to kill him—in order to take down a corrupt corporation. In the process, the assassin realizes the journalist is hiding a secret from him that will completely change his life. Both leads are QPOC (one is asexual, the other bisexual) and the story centers on themes of marginalization and mental illness. You can also think of it as somewhat similar to Captain America: The Winter Soldier, but starring QPOC. 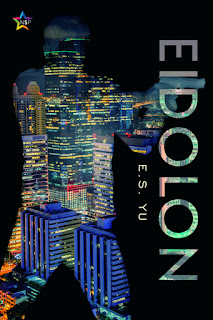 When Cyrex Corp, one of the foremost bioaugmentation companies in the world, sends Vax to assassinate journalist Zai Lumero, Vax thinks it’ll be a straightforward job. With his bioaugments, he’s never botched a job before. But then the hit unexpectedly goes south, and before Vax can correct his mistake and finish Zai off for good, he discovers that Cyrex has turned on him, putting him in their crosshairs as well.

With no one else to turn to, he strikes a grudging partnership with Zai to help him expose Cyrex’s connection to a missing persons case and take the company down, before Cyrex silences them forever. Getting along with a justice crusader who hates Vax’s profession with a burning passion isn’t easy—though Vax finds himself drawn to Zai in a way he never expected.

Yet as Zai races against time to unearth Cyrex’s secrets, Vax can’t shake the feeling that Zai is hiding something from him. And the closer he gets to uncovering the answers—of how he’s related to Zai’s investigation, and how Zai is connected to a past that Vax can’t remember—the more he suspects that finding out the truth might destroy him.

E.S. Yu is a writer of speculative fiction and a geek who lives for video games, superhero comics, and all things sci-fi/fantasy. E.S. is a recovering law school graduate who lives off green tea and dreams of writing full-time; for now, she follows wherever her muse takes her to places sometimes dark, sometimes quirky, but always hopeful.