Today I welcome M.A. Hinkle to the blog to answer a few questions for Author Interview³.

1) Tell us 3 little-known facts about you
A) My debut series is contemporary romance, but for most of my life, I’ve written urban fantasy.
B) The core characters of my debut, Death of a Bachelor, are escapees from a fantasy novel that I liked too much to scrap entirely when I wrote them out. (Lucky for them because my fantasy books have a high body count.)
C) This story was originally imagined as a standalone but has since ballooned into an eight book series. I guess I haven’t entirely escaped the habits I picked up in fantasy.

2) Describe your writing style in 3 words
Goofy, sappy, and sarcastic

5) What are your 3 essential writing tools?
My favorite pen, a good notebook for planning out scenes, and a really nice mechanical keyboard so I can type as fast as I think.

6) Where are your 3 favourite places to write?
I’m a sedentary writer these days, but when I was in college, I had three different good places to sit. First, I liked the top floor of the library, where I could sit by the picture windows and see the whole city stretching out in front of me. Second, I liked to work in my college cafeteria because there was a pleasant amount of white noise and freely available drinks. And third, I liked writing in any class during the period because I was a bad student like that.

7) Name 3 items on your writing wish list
I’d like to try live writing a book on Twitch because it sounds like fun/a way to make sure I block off extra writing time instead of getting distracted.

8) What are your top 3 tips for aspiring writers?
A) If you want writing to be a job, treat it like a job. Make time for it every day, even if it’s stolen minutes between classes or feeding the baby.
B) Find someone who will read everything you write. They don’t need to be a seasoned critic, just someone who will listen while you talk about your WIPs or your ideas without squashing your enthusiasm.
C) Try writing in different genres. I tried writing high fantasy for years because that’s what I like to read, even though what I wrote for fun (*cough*fanfiction*cough*) was usually light and fluffy and funny. When I stopped trying to force myself into a box that didn’t fit me, the words came more easily, and I could even work on my fantasy books without feeling so constrained.

9) Tell us 3 of your writing plans for the year ahead
Livewriting a book, finishing at least three novels, and setting up a Patreon.

10) Tell us about your latest release
Death of a Bachelor is a romantic comedy about dealing with grief. In case you’re not confused enough, here’s a list of things that happen in this book. Damon and Cathal, two men who were determined to hate each other until the end of time, maybe perhaps realize they were wrong, but admitting that would require not yelling at each other for thirty seconds. Damon makes many cakes to cope with his feelings, including one shaped like a T-rex. Cathal tries to give romantic advice, even though he knows nothing about romance. Damon’s teenage son enters his school production of A Midsummer Night’s Dream to try and win over his crush, and Damon and Cathal team up to embarrass Felix as much as humanly possible. And so on. 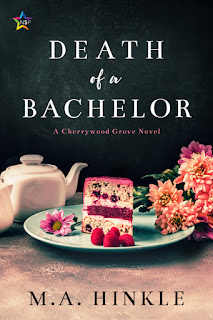 Cathal Kinnery is an arrogant, overeducated jerk, and Damon Eglamore is not afraid to tell him so. But Damon married Cathal’s best friend, so they have an uneasy truce. Then she passes away. Now they’re stuck together in close quarters, trying to honor her memory without shouting at each other all the time.

At first, they have no idea how to move forward. Damon is a chef, but all his favorite recipes remind him of his late wife. Cathal would love to start tomcatting around town again, except for that annoying promise he made to his best friend about looking after Damon.

Then Damon’s son comes to them for help, convinced the only way to win over his first crush is a gender-bending Shakespeare production. After that, Cathal talks Damon into taking up baking as a new way to use his talents. Next thing they know, they’ve begun a new life working as a team instead of jumping at each other’s throats. But can they trust each other long enough to make it last, or will they fall into old bad habits again?

About the Author
M.A. Hinkle swears a lot and makes jokes at inappropriate times, so she writes about characters who do the same thing. She’s also worked as an editor and proofreader for the last eight years, critiquing everything from graduate school applications to romance novels.