Today I welcome Mickie B. Ashling to the blog to answer a few questions for Author Interview³.

1) Tell us 3 fun facts about your writing history
Like many writers in the m/m genre, I got my start by writing fan fiction. I was obsessed with the show Queer As Folk and didn’t appreciate the ambiguous ending for Brian and Justin. I started a blog on Live Journal so I could write my own version of their story—one with a clear happy ending.
About a year or two later, I attended a week-long writer’s “boot” camp at Kenyon College in Ohio. At one of my workshops, I was asked to write a spontaneous piece without any preparation. I fell back on something familiar and wrote a sex scene between Brian and Justin. Unbeknownst to me, this short was selected by my teacher, and I had to read it in front of hundreds of aspiring writers and professors. ~~~dies~~~
At the airport on my way home, a stranger came up to me and asked if I was that “soccer mom who wrote porn.” The rest, as they say, is history.

5) What are your 3 essential writing tools?
Silence
Internet
Rough Outline

6) Where are your 3 favourite places to write?
Bedroom
Anywhere quiet with a cup of coffee close at hand
While I’m traveling, I like to find a secluded spot in the hotel or boat lobby (I love to cruise), so I can people-watch and perhaps find something or someone to spark my imagination.

7) Name 3 items on your writing wish list
I’d like to cross off more countries that are on my traveling/writerly bucket list such as Australia and China.
Learn how to stick to a detailed outline instead of veering off to parts unknown and wondering how in hell to get back to the central plot.
Write something my grown children or grandchildren might be interested in reading someday. They’ve never understood my interest in the m/m genre and haven’t read any of my novels. It was discouraging at first, but now I’ve accepted that it has nothing to do with me and everything to do with them. It would be nice, though, to write something they could read without cringing.

8) What are your top 3 tips for aspiring writers?
Write every day.
Don’t be afraid to try something new.
Try not to hunt down reviews. It’s a soul-sucking waste of time and a recipe for disaster.

9) Tell us 3 of your writing plans for the year ahead
I’m writing the sequel to A Tangled Legacy, a fantasy/sci-fi/paranormal/romance released by NineStar Press in 2018. I hope to have it ready for submission by April or May of this year.
Write another historical romance or add content to one that’s already been written and re-publish.
Co-write something. I’ve never tried it before, and I think it’s worth a try.

10) Tell us about your latest release
Yield is the fifth book in the Bay Area Professionals series, but it can be read as a standalone. The first four novels are published by Dreamspinner Press. Yield is self-published because it’s not your standard romance. It explores the darker side of BDSM, addiction, and self-harm. A reader who gave me a 4-star rating on Amazon and Goodreads commented, “Even though there are no drug or alcohol problems, this story is very strongly about addiction and recovery. It was refreshing to see this scenario play out sans the inclusion of mood altering substances and shows a side of addiction/recovery not often addressed.” Another reviewer mentioned, “I appreciate the depth of the story and its celebration of the complexity of human experience. Yield provides an enriching and thoughtful read with a cocktail of interesting juxtapositions without the moralistic overtones that can otherwise leave a bitter taste.”
Characters from the first four novels play secondary roles in Yield, but there’s certainly enough backstory to keep a new reader in the loop. As I mentioned earlier, this isn’t a standard romance, and not for everyone, but if you’re looking for something different, I can promise you won’t be bored. 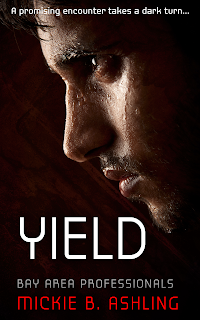 Captain Sami Soros and Father Jay Blackstone cross paths at a major European hub. When systems shut down due to a cyber-attack, flights are delayed and the resulting chaos is unprecedented.

After having served three tours in Afghanistan, recently discharged Sami struggles with his new civilian status. Emotionally depleted, and dangerously edgy, he views most of his fellowmen with utter contempt.

Jay is returning to his parish in San Francisco after a month-long retreat meant to shore up a crumbling vocation. All vestiges of spirituality melt away when he sets eyes on Sami.

Yield is available exclusively at Amazon and is free to read on KU.

About the Author
Mickie B. Ashling is the pseudonym of a multifaceted woman who is a product of her upbringing in multiple cultures, having lived in Japan, the Philippines, Spain, and the Middle East. Fluent in three languages, she’s a citizen of the world and an interesting mixture of East and West. A little bit of this and a lot of that have brought a unique touch to her literary voice she could never learn from textbooks.

By the time Mickie discovered her talent for writing, real life got in the way, and the business of raising four sons took priority. With the advent of e-publishing--and the inevitable emptying nest--dreams of becoming a published writer were resurrected and she’s never looked back.

She stumbled into the world of men who love men in 2002 and continues to draw inspiration from their ongoing struggle to find equality and happiness in this oftentimes skewed and intolerant world. Her award-winning novels have been called "gut wrenching, daring, and thought provoking." She admits to being an angst queen and making her men work damn hard for their happy endings.

Mickie currently resides in a suburb outside Chicago.