Do you read along with your audio books?

No, because I don't really listen to audio books. I've played one on occasion (if one of my actor crushes is narrating), but on the whole I don't enjoy them. I'm a visual person. I need to be looking at the page. Just listening, I get distracted by whatever else I'm doing and don't take it in.

Opening sentence:
It is then sixty years since Edward Waverley, the hero of the following pages, took leave of his family to join the regiment of dragoons in which he had lately obtained a commission.


From page 56:
Waverley sat down almost in silence, and with an air of absence and abstraction which could not give Miss Bradwardine a favourable opinion of his talents for conversation. 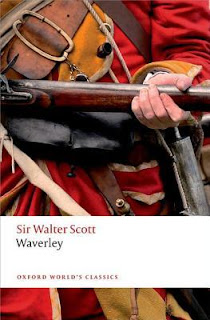 Edward Waverley, a young English soldier in the Hanoverian army, is sent to Scotland where he finds himself caught up in events that quickly transform from the stuff of romance into nightmare. His character is fashioned through his experience of the Jacobite rising of 1745-6, the last civil war fought on British soil and the unsuccessful attempt to reinstate the Stuart monarchy, represented by Prince Charles Edward. Waverley's love for the spirited Flora MacIvor and his romantic nature increasingly pull him towards the Jacobite cause, and test his loyalty to the utmost.