Today I welcome Abigail de Niverville to the blog to answer a few questions for Author Interview³.

1) Tell us 3 fun facts about your writing history
The Lord of the Rings trilogy inspired me to write books.
I wrote the first draft of I Knew Him when I was fifteen.
The Outsiders helped me realize I could write stories with male protagonists.

4) Share your 3 favourite books
Aristotle and Dante Discover the Secrets of the Universe, Sense and Sensibility, The Handmaid’s Tale

5) What are your 3 essential writing tools?
Laptop, notepad, lamps

6) Where are your 3 favourite places to write?
My desk, the couch, the front steps of my house

8) What are your top 3 tips for aspiring writers?
Read widely, write often, and never give up!

9) Tell us 3 of your writing plans for the year ahead
I’m working on a musical theatre project, finishing a novel set on the beach, and revising a NaNoWriMo draft.

10) Tell us about your latest release
I Knew Him is a YA contemporary and my debut novel! It’s got a production of Shakespeare’s Hamlet as a framing device, and I definitely drew inspiration from the play as I was developing the story. It’s not a retelling, but if you look, you may find scenes and elements pulled directly from the play.
It was also the first book I ever finished writing, and for that it means a lot to me. Seeing it published is so surreal and so overwhelming! Julian was a protagonist who started as my complete opposite, and over time became more and more like me. Though we still have our differences, Julian’s heart is a reflection of mine and I’ve loved being in his head for all these years. 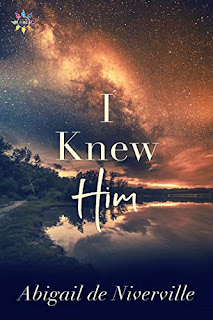 Amazon / B&N / NineStar Press / Books2Read
In his senior year of high school, Julian has one goal: be invisible. All he wants is to study hard, play basketball, and pretend he’s straight for one more year. Then, he can run away to university and finally tell the world he’s bisexual. And by “the world,” he means everyone but his mom and best friend. That’s two conversations he never wants to have.

When he’s talked into auditioning for the school’s production of Hamlet, Julian fears that veering off course will lead to assumptions he’s not ready to face. Despite that, he can’t help but feel a connection to this play. His absent father haunts him like a ghost, his ex is being difficult, and he’s overthinking everything. It’s driving him crazy.

The decision to audition leads Julian on an entirely different path. He’s cast as Hamlet, and the boy playing Horatio is unlike anyone Julian has met before. Mysterious and flirtatious, Sky draws Julian in, even though he fears his feelings at the same time. As the two grow closer, Julian begins to let out the secrets he’s never told—the ones that have paralyzed him for years. But what will he do if Sky feels the same way?

About the Author
Abigail de Niverville is an author and composer based in Toronto, Ontario. Originally from New Brunswick, Canada, she’s often inspired by the places she frequented there and the experiences she lived. She holds an M.Mus from the University of Toronto and is currently working on new music, as well as new works of fiction.