Do you check how many views your posts have received?
Occasionally I glance at stats, but it's never something I check religiously or stress over.

Opening sentence:
In a room of the Palais-Cardinal which we already know, near a table with silver gilt corners, loaded with papers and books, a man was sitting, his head resting in his hands.

From page 56:
He did not, therefore, know any more where Aramis was than where Athos and Porthos were; and the matter began to be somewhat embarrassing, when he fancied he heard a pane of glass being smashed in his room. 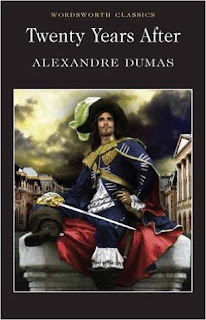 A year after the publication of The Three Musketeers, Alexandre Dumas produced a sequel worthy in every respect of the original. In Twenty Years After the much beloved D'Artaganan, Athos, Porthos and Aramis reunite to fight the forces of evil. In the original novel they defeated Milady, a formidable foe; now they need to face her vengeful son Mordaunt, as well as countering the machinations of the sinister Cardinal Mazarin. Their adventures also take them to England, where Cromwell is about to topple Charles I. Meanwhile, they must overcome the obstacles which the passing of time has placed between them. Rediscovering strength in unity, they fight for Queen and country.