Today I welcome TJ Nichols to the blog to answer a few questions for Author Interview³.

1) Tell us 3 fun facts about your writing history
My first release was Elf on the Beach. I wanted to try my hand at a Christmas novella and thought setting it in Australia where I live, where Christmas is hot, would be a nice change to all the wintery Christmas stories. I had already written the first Demonology book, but I submitted the novella first to test the water. I haven’t looked back.
I wrote a lot as kid but stopped to do the sensible stuff and only rediscovered it later.
As much as I love reading fantasy novels, I like there to be a relationship thread and a happily ever after, so I made sure that there is one, even if readers have to wait until the end of the series.

2) Describe your writing style in 3 words
Worldbuilding with romance

4) Share your 3 favourite books
At the moment they are:
Jackdaw by KJ Charles.
Daggerspell by Katherine Kerr
The Dry by Jane Harper

5) What are your 3 essential writing tools?
Laptop for writing, but I love pen and paper for plotting and brainstorming. I keep a different note book for each series, and I keep all of my research in there too. Sometimes it’s really well organised, sometimes it’s not.

6) Where are your 3 favourite places to write?
On the sofa with my feet up—I know it’s not good for my shoulders but it’s comfy and the cat likes it.
I have a piece of wood that sits on my treadmill turning it into treadmill desk which is the best thing for copy edits as it stops me from getting distracted.
I can generally write anywhere, and I’m used to snatching pieces of time to get things done.

7) Name 3 items on your writing wish list.
I’d love to write a thriller (I have some ideas).
I’d love to have my books in audio.
I’d like to get an agent.

8) What are your top 3 tips for aspiring writers?
Read widely, all different genres and nonfiction and biographies.
Don’t read so many craft book you don’t write anything.
Write what you want to read.

9) Tell us 3 of your writing plans for the year ahead
I’m going to write Book 3 in the Mytho series. I’m working on a stand-alone fantasy novel which I’d like to submit in the second half of the year and I’m toying around with a couple of other stand-alone ideas.

10) Tell us about your latest release
Lust and other Drugs is Book 1 in the Mytho series. The Mytho series takes place 10 years after an experiment with the Hadron Collider caused the mythological world to collapse into our world. So there’s lots of mythological beings. One of the heroes is a dragon shifter with invisibility issues (he can’t control it) and the other is a human cop and even though there are no rules against mythos and humans dating it would be very bad for his career. I love a love vs duty story. The series will follow the same couple as they solve crime and try to figure out how to get together in a world that isn’t quite ready for interspecies relationships. 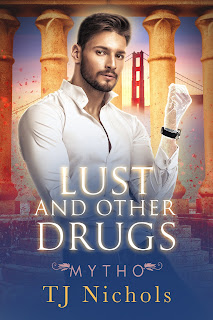 Police officer Jordan and dragon shifter Edra might have to work together, but they don’t trust each other—even if sparks do fly between them.

If anyone finds out Jordan’s a mytho sympathizer, it could kill his career. No one can know that he frequents the satyr dens and uses the drug Bliss. Another satyr overdose might not get much attention, but two dead humans? That shouldn’t be possible.

Edra, Mythological Services Liaison, has been covering up mytho crimes to protect the community’s reputation. With a mayoral election looming, the last thing his people need is a scandal.

To get a murderer off the streets, Jordan and Edra will be spending a lot of time together, and it won’t be easy to keep up with their deceptions… or to keep resisting each other.

About the Author
TJ Nichols is an avid runner and martial arts enthusiast who first started writing as child. Many years later while working as a civil designer, TJ decided to pick up a pen and start writing again. Having grown up reading thrillers and fantasy novels, it’s no surprise that mixing danger and magic comes so easily, writing urban fantasy allows TJ to bring magic to the every day. TJ is the author of the Studies in Demonology and Mytho series.

With two cats acting as supervisors, TJ has gone from designing roads to building worlds and wouldn’t have it any other way. After traveling all over the world and Australia, TJ now lives in Perth, Western Australia.