Today I welcome Jackie Keswick to the blog to answer a few questions for Author Interview³.

1) Tell us 3 fun facts about your writing history
1. I wrote my first novel when I was 12, while I was stuck in bed with chickenpox during the summer holidays. It was what today would be called an alt-history story, where the Norman invasion of England in 1066 did not succeed.
2. The two main characters of my Power of Zero series, Jack Horwood and Gareth Flynn, have their birthdays on August 14th and July 30th respectively. I used Gareth’s birthday as my submission deadline for Job Hunt, the first book in the series, with Jack’s birthday as my backup date in case something went wrong. Six years later, I still use their birthdays every year to finish work or release a new book.
3. When I write anything set in England, I try to use real locations, restaurants etc. that we’ve been to and liked.

5) What are your 3 essential writing tools?
Long walks, laptop, music

6) Where are your 3 favourite places to write?
On Saturday afternoons, it’s my sofa with music, a fire in winter, and maybe a glass of red.
The road between our village and the neighbouring one.
In the passenger seat of a car, on the road to Norfolk.

7) Name 3 items on your writing wish list
Top of my writing wish list: MORE TIME TO WRITE. (which won’t really happen until I stop working.)
Also near the top: finishing Jack’s story and trying my hand at writing an Edwardian mystery / spy story.

8) What are your top 3 tips for aspiring writers?
Just get it down. You can always edit later.
If you’re scared to submit a project to a publisher, get a friend to send the email for you, or ask them to come watch you do it.
You don’t have to sit at your desk to write.

9) Tell us 3 of your writing plans for the year ahead
The big project of the moment is all Power of Zero related. I’ve just had the rights to the first three books in the series returned and am editing my way through them before I re-release them with new covers and blurbs. I’m also very close to finishing Two Divided by Zero, the second of the Power of Zero prequels.
After that, I’ll get stuck into finishing Sound Judgement, a dystopian novel set in a post-anarchy England, and Embracing Fire, the second Gifted Guilds novel.

10) Tell us about your latest release
My most recent release, Repeat Offence, is a fantasy novella where I’m wondering what happens when a good deed is taken entirely the wrong way. In my fantasy world, warriors Taz and Hiro give their lives to end a war only to be sentenced to eternal life. They don’t get to spend eternity together, either. Instead, they must live – one as human, the other as a Guardian – until the human in the pairing dies. If the Guardian can reach him in that exact moment, then their sentence is ended… but, of course, this is much harder than it sounds.
Living forever really isn’t all it’s cracked up to be, but as Taz points out: “It was a harsh sentence, and unjust to boot. But if it was meant to cure us of compassion, it had failed.”
Writing Repeat Offence had its challenges. I’d never written a story that spanned hundreds of years and condensing all that time into key scenes wasn’t easy. Writing in first person, from only a single point of view was tricky, too, since I usually like to look at events from various character viewpoints. And then, I had to invent a space for the Guardians to live… and what the Muse came up with there surprised even me. 😊
In the end, though, I was happy with the result. It’s a story of two warriors, who do not compromise what they stand for, even if they’re made to suffer for their choices. And who are ready to make that choice once more when the situation calls for it.
Repeat Offence is fantasy. And while it’s not a romance, for me, Taz and Hiro’s tale will always be a love story. 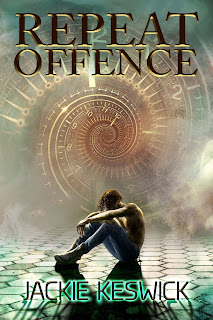 It should have ended with their deaths.
But dying in a wash of blood was just the beginning.

Sentenced to eternal life for sacrificing themselves in battle, warriors Taz and Hiro must take turns living as human and Guardian on opposing sides of the veil with only a chance to catch a glance of each other in the moment of death.

Until an attack forces Taz and Hiro to make a choice. Should they cling to what little solace they’ve carved out for themselves? Or should they sacrifice their lives to save countless others and risk the wrath of the Judges for a second time? 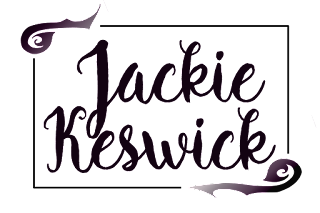 About the Author
Jackie Keswick was born behind the Iron Curtain with itchy feet, a bent for rocks, and a recurring dream of stepping off a bus in the middle of nowhere to go home. She's worked in a hospital and as the only girl with 52 men on an oil rig, spent a winter in Moscow and a summer in Iceland and finally settled in the country of her dreams with her dream team: a husband, a cat, a tandem, and a laptop.
Jackie loves unexpected reunions and second chances, and men who write their own rules. She writes across genres, blogs about English history and food, has a thing for green eyes, and is a great believer in making up soundtracks for everything, including her characters and the cat.
And she still hasn't found the place where the bus stops.
For questions and comments, not restricted to green eyes, bus stops, or recipes for traditional English food, join her in Jackie’s Kitchen on Facebook or find her in all the usual places.