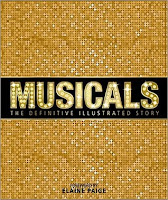 Musicals: The Definitive Illustrated Story showcases the complete history of the musical on stage and screen, from its origins in ancient Greece to early twentieth century dance halls and vaudeville to the golden age of cinema productions to the record-breaking Broadway musicals of today.

Packed with historical insights, memorabilia, behind-the-scenes gossip, and artifacts, Musicals: The Definitive Illustrated Story takes you on the ultimate behind-the-scenes tour of the best-loved musicals, such as Chicago, Les Misérables, The Lion King, The Phantom of the Opera, The Sound of Music, and many more.

In all, Musicals: The Definitive Illustrated Story features more than 140 notable stage and film productions and the stories of the people who created them. Throughout, clear infographics, rich black-and-white and color photography, and a clever, informative design make this comprehensive overview of musical theater and movie musicals a true showstopper.


Musicals: The Definitive Illustrated Story is a gorgeous volume sure to please any musical theatre fan. The book has a beautiful layout that perfectly blends text and image, and I particularly enjoyed the 'timelines' for each featured show, which mark the placement of songs within the action. I was also thrilled to see a handful of foreign-language musicals included, as so often European shows are left out of these sorts of books in favor of a solely English-language focus. Good to see them finally getting the recognition they deserve. This is definitely a book I could happily flick back through again and again.