Today I welcome author Deborah Riley-Magnus to tell us a bit about her fantastic new vampire story, Cold in California,  and to offer a great giveaway. So, read on! 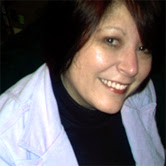 What happens to a vampire after he finally dies? Heaven? Hell? Nope, purgatory in a West Hollywood warehouse. Go figure.

Loving vampires and respecting vampire lure are two different things, something I discovered when I decided to write an urban fantasy. To me, standard mythology is a thing to be questioned, and if I wanted to write something totally unique, I had to find that one little hook that would perk a vampire lover’s ears.
I’ve always been torn about vampire stories, especially now as contemporary authors make their vampiric creatures more and more humane and gentle. I don’t mind the blood and gore, and certainly don’t hate the sexy nature of these creatures. What has always bothered me was the hopelessness about them. Where was the incentive to fight their murderous nature?
And then, of course, there was the “final death” issue – that accepted concept which proclaims that when a vampire is dead, he’s just plain dead. They flake away and dissolve into nothingness. Poof! My mind said … what if …
Writers think about this stuff all the time. If something is dead it’s gonezo, fini, history, ended, right? But everyone has different rules. For the Christians, after death one goes to heaven or the other place. For ghost hunters, the dead stick around to move salt shakers and whisper in our ear. For Native Americans, there’s the Happy Hunting Grounds. For Eastern cultures, you just may come back as a dung beetle or ox or something else until you reach the top ladder rung and slip into the unknown. There’s always a place for the dead to go. Even atheists tip toe past a grave yard.
To complicate things further, fiction and mythology have even more rules. We have zombies and vampires and a plethora of other dead creatures walking around, maiming, sucking blood and brains and running amuck. The only question, at least for me, is … does dead really mean dead? Even for these seemingly undead, animated and vicious supernatural creatures, is there really an end?
According to the standard mythology, when vampires are finally dead, whether they were turned into the sucking beasts by choice or not, they just melt or explode into nothingness. It just seems unfair. Seriously, shouldn’t they face hell at least? And what if it was never they’re choice to be killers? What if some vampires get a second chance? Where do those vampires go after their final demise? This was the impetus for Cold in California.
Cold in California playfully proposes that even the worst of the supernatural
world gets one more chance at redemption. Twice-baked vampire, Gabriel Strickland, learns this when he’s whisked from his final demise and into a holding tank of sorts, a warehouse tucked secretly in West Hollywood. Sixty creatures, including other dead vampires, pixies, a legendary Navaho stick man and bothersome leprechauns, struggle together to earn brownie points (against their natures) and wait out possible centuries of purgatory. Gabriel receives dubious advice from Crudo Cushman, a controlling troll who runs the place, but there are always bugs in the pudding and he faces them all. Enter, the beautiful Dori Gallagher, who not only knocks Gabriel off his feet, but also an evil warlock who has designs on her.
His life after double death is all about balance, but when menacing forces gather against Gabriel and everything he’s come to respect, it’s a fiery clash of supernatural verses supernatural in one heroic effort to save his new reality. 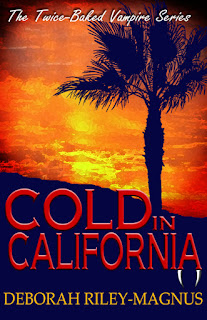 Cold in California is the first of a five book “Twice-Baked Vampire Series” and was released June 15, 2011.
Cold in California Amazon Link
http://www.amazon.com/Cold-California-Twice-Baked-Vampire-ebook/dp/B0055EC7E8/
Cold in California Book Video link
http://www.youtube.com/watch?v=jorKc0hSaoA
Cold in California Website
http://coldincalifornia.com/
The Twice Baked Vampire blog
http://thetwicebakedvampire.wordpress.com/
My Wonderful Publisher’s Link
http://ireadiwrite.com/
Author Bio
Deborah Riley-Magnus is an author and an Author Success Coach. She has a twenty-seven year professional background in marketing, advertising and public relations as a writer for print, television and radio. She writes fiction in several genres as well as non-fiction.
Deborah produces several pieces weekly for various websites. She also writes an author industry blog, Writaholic, and teaches online and live workshops as The Author Success Coach. She belongs to several writing and professional organizations. In 2011, she has two novels and one non-fiction, The Author Success Coach: Strategies for Author Success in a Turbulent Publishing Landscape, being released.
She’s lived on both the east and west coast of the United States and has traveled the country widely.
My Website and Blog Links
I blog - http://rileymagnus.wordpress.com/
I teach - http://theauthorsuccesscoach.com/
I fiction – http://coldincalifornia.com/
I write - http://deborahriley-magnus.com/
I play - http://whispersofthemuse.org/
I tweet – http://twitter.com/rileymagnus
I facebook - http://www.facebook.com/deborah.rileymagnus
I should be sooo tired!

The Giveaway
1 signed ebook copy of Cold in California is up for grabs. Here are the rules....
1) Be a follower of my blog
2) Leave a comment on this post as your entry
3) Don't forget to leave your email address so I can contact you
4) Open internationally
5) Contest ends 9th July 2011