For today's snippet, I thought I'd share a few lines from my forthcoming MM novella, Wish You Were Here, which releases from Dreamspinner Press on 8 Feb and for which you'll find the blurb and other details below.


He had no idea where his parents found this place. They had simply announced yesterday morning that they would be spending the next two weeks together in this patch of nowhere on the outskirts of the Cotswolds. Attendance was compulsory—try as he might, Oakley couldn’t budge his mother on that—so he’d thrown a few things into a duffel bag and determined to make the best of it. When they returned home, he’d be back to university. A few months ago, he’d dreaded the thought of his final year; now he looked forward to it as a reprieve from his mother’s tears and his father’s blank-faced stoicism. 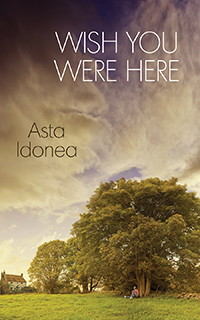 The death of Oakley’s sister has left his family broken and buried beneath their grief. In an attempt to get out from underneath their pain, they rent an isolated cottage in the Cotswolds. For Oakley, it’s an exercise in futility. He doesn’t see much hope for things to get back to the way they used to be, and he’s bored and restless as he waits out the time until he can return to the city and university. All of that changes when he meets local boy Bobby, and the connection between them is instant. Within a few days, Oakley is ready to walk away from everything to stay with Bobby. However, Bobby has problems of his own, and they might be more than the budding romance can survive. But they might also give Oakley a new perspective on his own situation.